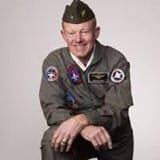 What can you learn from a Vietnam Prisoner of War that will help you be a more successful Financial Advisor?
A lot. I mean, you’ve had some challenges in life, but 6+ years as a Prisoner of War?
If you’re like most human beings, you probably have some fears that are holding you back from tapping your true potential in business. Fear of not being good enough. Fear about talking to people with more money. Fear about being too young, too old, or not having the right answer on the tip of your tongue. Fear about not knowing exactly what to say. Fear of coming across badly, wrong, or awkward. Fear about being perceived as a slimy salesperson. Fear about whether or not you deserve to be successful. It’s a long list. Fear is natural. Fear is part of being human.
Join Bill Bachrach and guest presenter, Captain Charlie Plumb for a free online training.
Date & Time: Thursday, June 18 at 1:00pm PT / 4:00 ET

It’s the goal of the “Master your Mindset” series to help you blow up, or at least overcome, your obstacles to success.
Register and attend this series online training for fascinating and powerful conversations with experienced world-class experts at helping people blow up fears and limiting beliefs to achieve higher levels of success.
30 minutes of content. 30 minutes of Q&A. No selling.

—-
Bill Bachrach is a respected thought leader, keynote speaker, author, and a top advisor trainer and coach serving the Financial Services Industry exclusively for over 3 decades.
Captain Charlie Plumb has lived what he believes to be the American Dream. As a farm kid from Kansas, he fantasized about airplanes, although he felt certain he would never have the opportunity to pilot one. It would be the United States Navy who afforded Plumb the opportunity to live out that dream. On his 75th mission, just five days before the end of his tour, Plumb was shot down over Hanoi, taken prisoner, tortured, and spent the next 2,103 days in an 8-by-8 foot cell as a Prisoner Of War. During his nearly six years of captivity, Plumb distinguished himself as a pro in underground communications. He was a great inspiration to all the other POWs and served as chaplain for two years. Following his repatriation, Plumb continued his Navy flying career in Reserve Squadrons where he flew A-4 Sky Hawks, A-7 Corsairs and FA-18 Hornets. His last two commands as a Naval Reservist were on the Aircraft Carrier Corral Sea and at a Fighter Air Wing in California.