How to Talk Yourself into Success Like a Navy SEAL 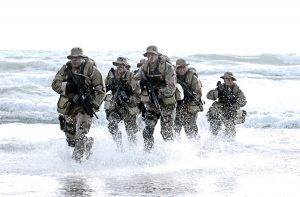 Next time the Olympics are on, pay attention to the interviews with the top-performing athletes, the ones who bring home the gold. You’ll hear how they talk about their events and training. The phrases they use, the words they feed themselves — how they talk themselves into success. Physically, these men and women train constantly, just as SEALs do. But what sets the gold medalists apart is a superior state of mind.
This is not something you’re born with. It’s something you develop no matter who you are. It just takes commitment, will, and practice.
As I said, when we studied Olympian gold medalists while redesigning our Navy SEAL sniper training program, we found two traits that set these superachievers apart. The first of these was complete and total confidence. And self-talk was how they created that total confidence.
The Importance of Self-talk
If you think this sounds like some airy-fairy “personal growth” workshop talk, think again. Adopting this as one of our core training planks allowed us to turn out a generation of lethal snipers on the battlefield. We trained our instructors to teach and reinforce with positive language rather than negative, reminding students what to do and how to do it right rather than cautioning what not to do and castigating them for what they did wrong. And we trained our students in how to talk to themselves to achieve success.
The truth is, whether out loud or silently, consciously or not, we all talk to ourselves constantly. Every one of us has this running commentary going on in our head. Most of us just aren’t aware of it. The first step in training your self-talk is to become aware of that running commentary. Once you do, you will be amazed. I’ve trained myself to hear it. Still, I am constantly stunned by the crap people tell themselves.
You Fail Because You Decide to
I saw this happen in BUD/S. It was the middle of Hell Week, that legendary five-day ordeal designed to extrude all but the toughest from the program. During a rare lull in the punishment when we were allowed to eat something, I overheard two guys in the class talking.
“You know,” said one, “I really wanted to be a pilot anyway.”
“Yeah,” said the other. “Did I tell you my girlfriend was hoping we would get married this month? It’s tough, all this time away. I’m thinking this really isn’t fair to her.”
I could not believe what I was hearing. These guys were literally talking themselves out of making it through BUD/S! Right then and there I knew: When graduation came I would be standing there, and those guys would not. Months later, that’s exactly what happened.
I saw and heard it happen again and again.
“Man, my leg hurts. I don’t think I can do this.”
“Someone’s going to get killed, and I sure as hell don’t want it to be me.” At least this one was honest.
“All the cursing — it’s just too much for me.” Wait — was he serious? He was. I actually heard an officer in my BUD/S class say this. He was 26 years old and sure enough, he quit. So did all the others. Of the nearly 200 men who quit my class before it was over, not one was physically incapable of making it through the course. They quit because they decided to.
Outstanding Success Starts in Your Mind, and So Does Failure
I’m sure you’ve seen this, too. You have friends who talk to themselves by saying, “Oh, I’m just an average golfer,” or “I’m not that good a swimmer,” or “I’m not a people person,” “I don’t really dance,” “I’m not good at math,” “I’m not much of a businessperson,” “I don’t really know how to cook,” and on and on. Maybe you talk to yourself that way. (Most people do.) If you’re having that conversation with yourself, you’re setting the bar too low. You’re limiting yourself from ever becoming anything above average. You’re talking yourself out of the success you want.
I mentioned that I meditate every day. I also rigorously monitor my self-talk. Constantly, I remind myself that I’m going to achieve the outcome I’m shooting for, that I’m totally capable of achieving it, and that it’s already in process. That it’s inevitable. If that sounds like self-hypnosis, well, in a way it is.
_______

This article was written by Brandon Webb, who is a combat–decorated Navy SEAL turned entrepreneur.

Do you think you might have some limiting beliefs that are holding you back from achieving your goals?
If so, download my Special Guidebook, Are Your Limiting Beliefs Stopping You from Achieving Your Goals? and squash any limiting beliefs you might have and turn on your success-oriented beliefs, so you can accelerate the achievement of your goals.